Muslim invasions and conquests of India between 711 and 1761 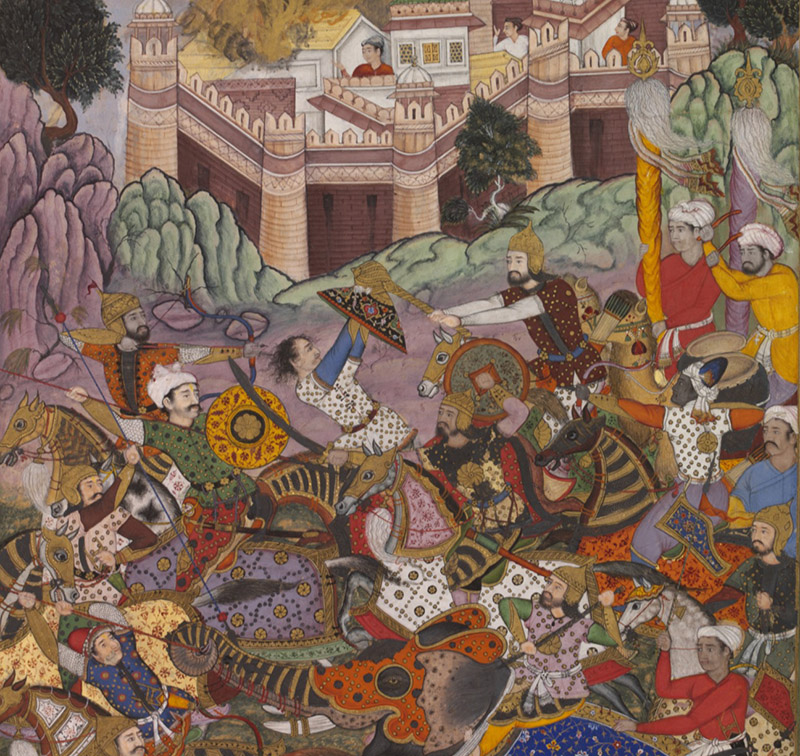 India was one of the main trading adversaries of the Muslim empires. When more and more Arab ships began to be attacked by Indian pirates in the 8th century, Muslims then decided to launch punitive attacks on India, attacks which gradually turned into invasions.

Several empires succeeded each other from the year 711, making India a very famous and sought-after place of plunder. First with the Iraqis, the Syrians, the Persians, the Turks, the Afghans, and finally the Mughals (the Islamized descendants of the Mongols). They were able to acquire almost all of India, only the south remained rebellious much of the time. The most Islamized parts were Bengal in the east (present-day Bangladesh) and Multan, with Sindh, the Hindu Shahi in the west (present-day Pakistan and Kashmir). The rest of India was difficult to convert because the population was too dense, the caste system was too well established to be defeated. The Sultans who built their empires in India with their headquarters in Delhi therefore made do with having Hindu subjects. They tried to entice the people to convert with the help of the jizîa, a tax dedicated to non-Muslims, but only traders and artists who wanted to sell their goods to Muslims themselves became Muslims in order to to escape this tax and be able to trade with the Muslim elites.

How could Muslims conquer India so easily?

With 2000-3000 fighters, the Muslims were able to decimate an army of 50,000 Indian infantry. The Indian army was quite slow, being massive and endowed with elephants, while the Muslim armies were equipped with horses and were very mobile and fast, with well-made swords. When the Indian chiefs died in combat, the soldiers fled by the thousands. Indeed, the Indians had no attachment to their princes who were very severe with their subjects, nor to their region. They were at that time very self-centered and as soon as the person who paid them died, namely their general, they deserted en masse. Due to the caste system, the bulk of the people were weak, docile and defenseless in the face of hostilities launched by their enemies.

The first Muslim forays into India were the most devastating for the local culture with the destruction of temples, libraries, not to mention countless massacres.

The Portuguese established trading posts in the western part of India at the beginning of the 16th century. They then began to trade in slaves and spices. For the Muslims, it was an affront, they had to decimate several times the ports and fortifications founded by the Portuguese who immediately returned to settle.

End of Muslim empires in India

After more than 1000 years of presence, Muslim power has gradually crumbled. Because of internal wars, whether it is the heir of the Sultan who kills his father and the other suitors, or the suitors who kill the heir, the division of the inheritance was pitiless within the family which dominated the 'empire. In addition, governorates in different parts of India were needed in order to secure power, and governors often declared their independence upon the death of a Sultan. It was therefore necessary to constantly reconquer countries. The Muslims were enemies among themselves, be it the Persians, the Turks, the Syrians, the Mughals, they did not hesitate to destroy the sultanates already in place to take control in their turn. At the end of the Muslim presence, it was essentially the jizea that was too high to finance the conquests of Bengal that brought the Empire down.

Among the last Muslim emperors are Shah Jahan, the one who built the Taj Mahal in honor of his wife; at first he ruled the empire ruthlessly by massacres, destroying new temples, exterminating many cows. These policies have increased its unpopularity to a climax. Then, weary of power, he left the reins of the country to his beloved wife, who was even more ambitious. On the death of his wife, he built many palaces and buildings that were an economic pit. The British were then easily able to take over from 1757 because the Indies and the various regions were too fragmented.

On the cultural point of view, there have been fewer traditional Indian temples that have been built. These buildings looked more like the temples one can admire in Burma. There have been more buildings inspired by Muslim art. The Mughals brought the art of miniatures, carpets. The libraries created by the occupier were Muslim, so there is only one side of the story, with mainly the military aspect. It is difficult to know how many Indians and Muslims perished as a result of the multiple invasions and conquests. In the year 700, there were 75 million people in India, 226 million in the world. Indians, for example, made up over a third of the world's population. The Indians practiced the jauhar, a rite which consisted in making mass immolations, mainly of women, so that they did not know the pangs of enemy conquest.

The Indies were extremely wealthy, the Sultans were able to recover colossal amounts of gold, jewelry, diamonds, and subsequently finance invasions in the West. The Indies had to be divided into several territories (Pakistan, India, Bangladesh) because the peoples had become too different.

Indians only began to develop nationalism during the British occupation.