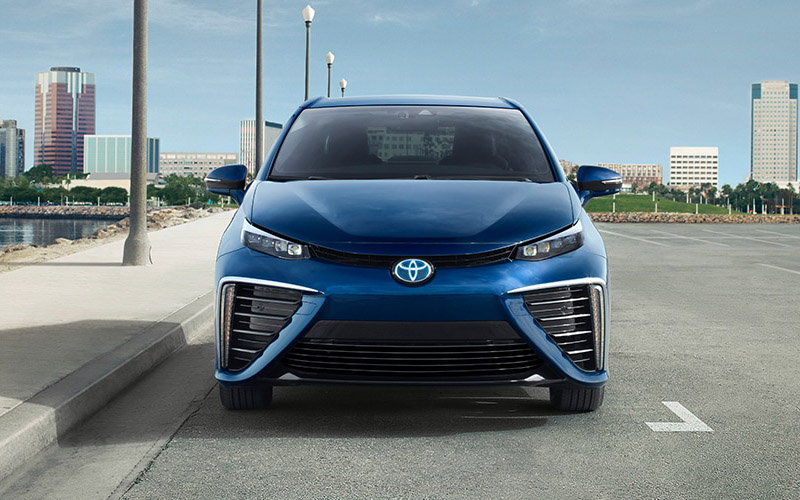 Toyota is releasing a new generation for its Mirai hydrogen car. The fuel cell is much more efficient. The price is also more affordable. The Toyota Mirai is the first production car to have a hydrogen engine. Autonomy is greatly increased.

The design is more sober, with fewer angles, less fantasy than that of the previous version. The fuel cell was previously located under the seats, it is now under the hood. The power of the battery increases from 114 kW to 125 kW, an increase of almost 10%. The size of the tanks that can store hydrogen at a pressure of 700 bars has been reduced from 4.6 kg for the previous version to 5.6 kg. The range of the Toyota Mirai is thus extended by 150 km, reaching 650 km. This hydrogen car can therefore compete with the electric equivalents at Tesla for example, which is not negligible.

The engine power increases in intensity from 154 hp to 182 hp. The engine torque is 300 Nm. The only negative aspect is the increase in weight which is increased by 100 kg. The price of the previous version was very high, since it was 80,000 euros. That didn’t stop Toyota from selling 10,000 copies. This version will cost much less, with a price set at 63,000 euros, not counting the ecological bonus. The new Mirai becomes much more accessible, while benefiting from good evolutions. Toyota has this time to sell 100,000 units.

AeroMobil will soon offer its flying car
https://w3ask.com/aeromobil-will-soon-offer-flying-car/
This flying car is a plane that can go into car mode. It will fly at the maximum speed of 200 km / h and reach 160 km / h on the road. Its engine ...
Let's Encrypt and ERR_SSL_VERSION_OR_CIPHER_MISMATCH
https://w3ask.com/encrypt-err_ssl_version_or_cipher_mismatch/
At a certain point, the free Let’s Encrypt SSL certificate can totally fail. This is an unresolved issue yet. The best solution is to ...
Wild card SSL and sub domain website
https://w3ask.com/wild-card-ssl-domain-website/
If you have a SSL certificate for your site, is it necessary to have a second SSL certificate (like a wild card SSL) for a subdomain ? A ...
Soon electric cars with an autonomy of 1000 km
https://w3ask.com/electric-cars-autonomy-1000/

At the Fraunhofer Institute, researchers have designed a battery that would increase the autonomy of electric cars by 2020. Current batteries ...
The MSI GTX 1080 Ti Lightning Z card breaks all records
https://w3ask.com/msi-gtx-1080-ti-lightning-card-breaks-records/

Guru3d has published the tests of this card. And the least that we can say is that the MSI GTX 1080 Ti Lightning Z supersedes all other video ...