How to unlock the last island in Jurassic World Evolution? 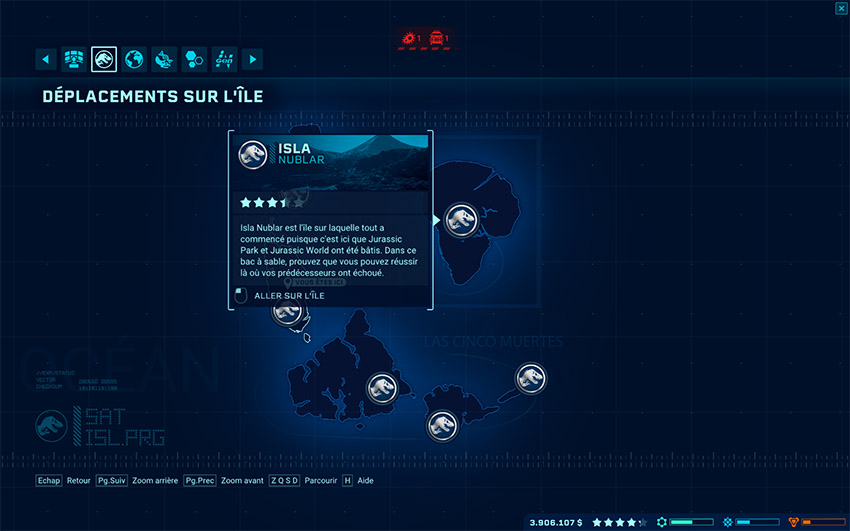 In the Jurassic World Evolution #ad game, initially we access a first island called Isla Matanceros. We are then entitled to the basics of the game with a partial tutorial on how to manage a park with dinosaurs and visitors who wish to observe them. The second island is called Isla Muerta, to access it you must obtain 3 stars in the rating of the park of Isla Matanceros. On this second island, there are storms more regularly, and the animals are also more difficult to manage; their level of comfort is more demanding.

The third island is called Isla Tacano, to be able to move to this island we need to have 3 stars in the rating of Isla Muerta. The park on the third island is in deficit, so you have to sell buildings to be able to re-shape the infrastructure and start having a positive income. The park must therefore be saved from bankruptcy. The fourth island is Isla Pena. To be able to go to this island, you must have 3 stars on Isla Tacano. Isla Pena is a small island with limited space, on which you have to set up a monorail to facilitate the transport of visitors. You also need to be able to manage the dinosaur enclosure that is in a confined area.

The fifth island is Isla Sorna. Here too it is necessary to obtain 3 stars on the previous island beforehand. On this island, the dinosaurs are free in a giant space. It is then necessary to create extensions of its park for visitors in order to find enough land to be able to build shops, entertainment, fast food.

How to unlock the last island in Jurassic World Evolution video game?

Surprisingly, for the last island we are unable to unlock it even with 4 stars on Isla Sorna. So how do you get there? In order to be able to go to Isla Nublar, you must return to the first island in the game, namely Isla Matanceros, and achieve a minimum of 4 stars! And only from there will we be able to unlock the sixth and final island.

Isla Nublar is a very large island in which you benefit from unlimited capital, so you can develop your park as you wish without worrying about finances. It is the duration of the game that will allow us to gain new dinosaurs and interesting information about the universe of Jurassic World.

How to increase the rating of dinosaurs in Jurassic World Evolution?
https://w3ask.com/increase-rating-dinosaurs-jurassic-world-evolution/

There are many ways to manage a park in the Jurassic World Evolution game, but the same guideline easily makes it possible to satisfy its visitors ...